Magdalene + Biopower and the Deeper Meaning Behind My Work 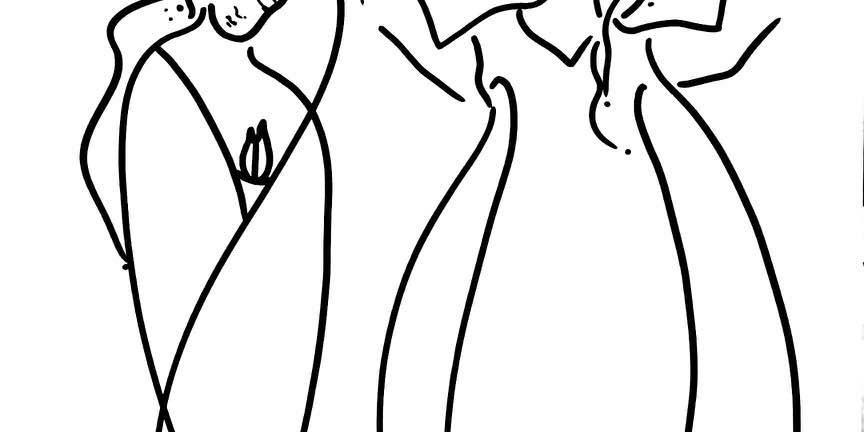 Today is Mary Magdalene’s Feast Day – and I thought I might share a few thoughts with you about the power of image and story to shape culture. 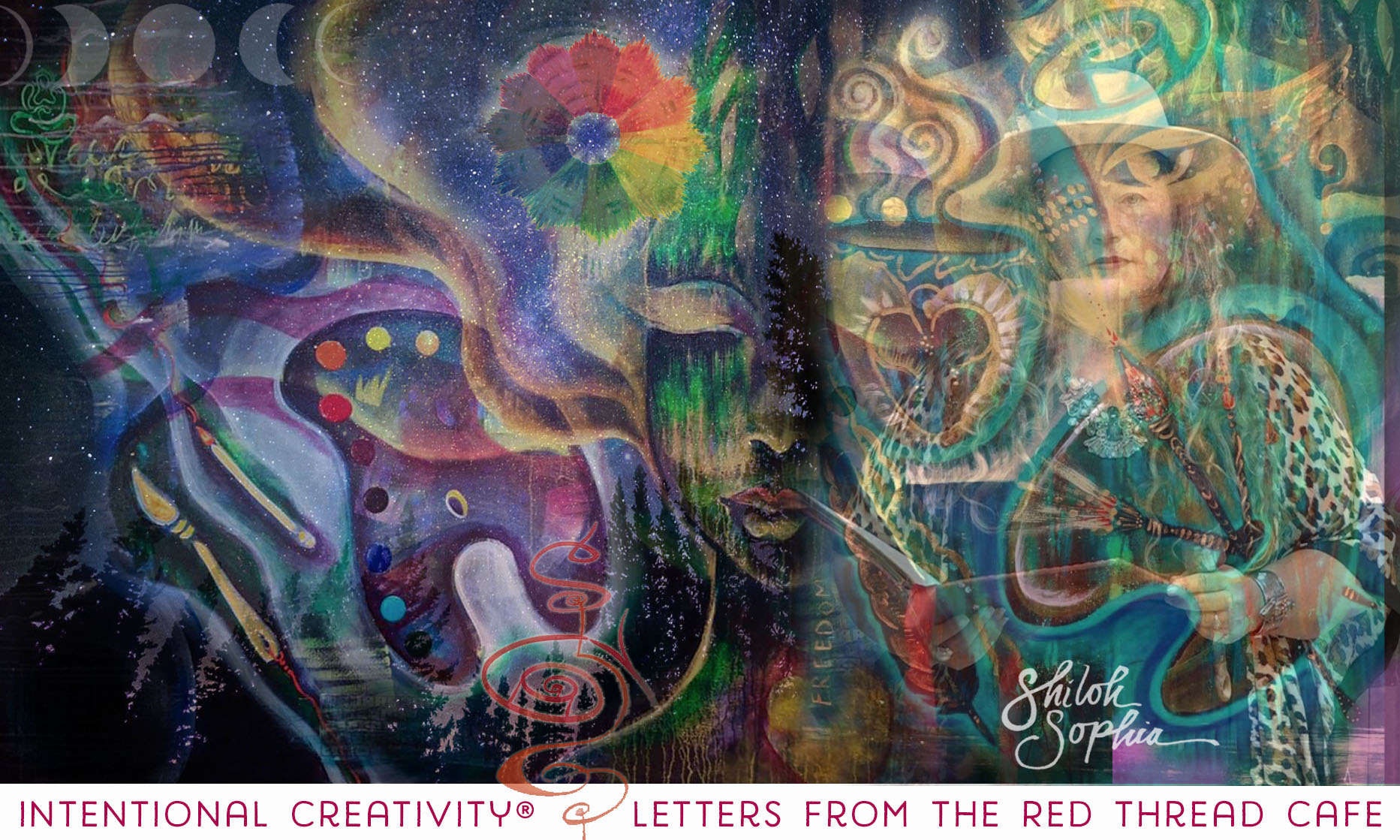 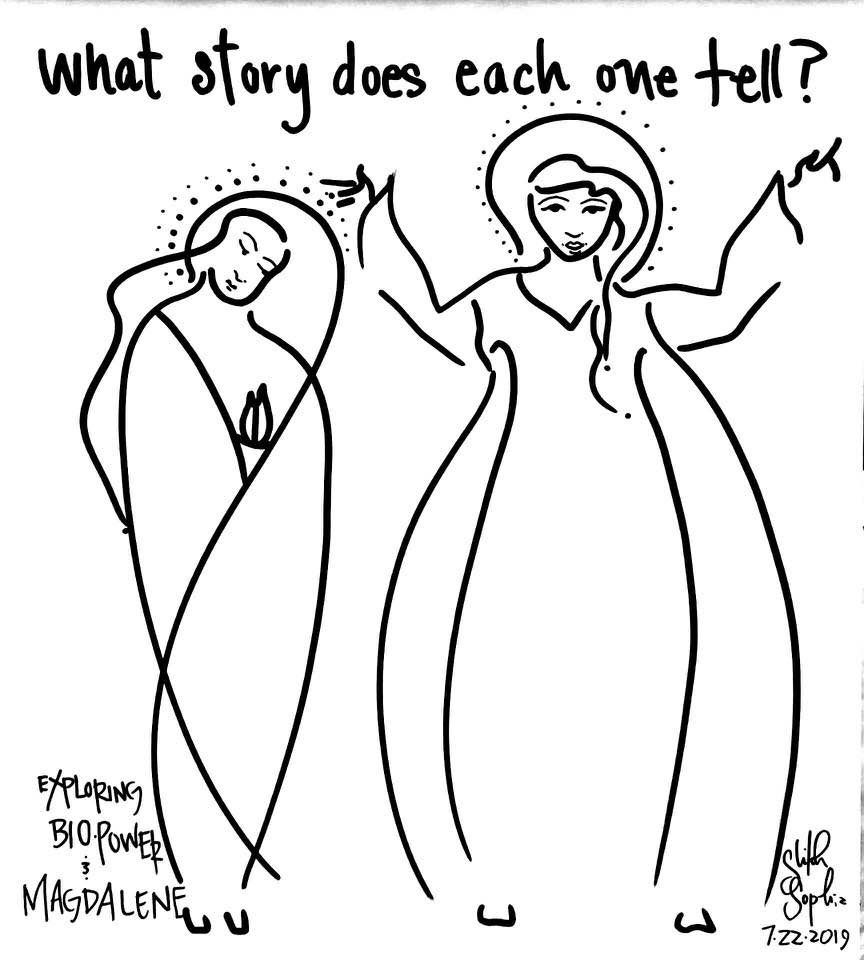 Regardless of your spiritual tradition, the story of Mary Magdalene is impacting women, gender, spirituality and sexuality. So even if this not your tradition now or ever, I think you may still get something out of reading it as it relates to mythology and the feminine image.

A Letter from the Red Thread Cafe

Greetings to you today!

What story does each woman tell with her body? Today is Mary Magdalene’s Feast Day. Can you share her story with one woman or girl today? I am. Here is what I often say about the topic…

Sometimes women are portrayed in art and history in a way that tells a story that isn’t true. This is enforced over time to such a degree that it can become as ‘truth’ in the minds of millions. The lie can even last over 1300 years! One example is the woman who was closest to one of the most powerful and well known men in the history of spirituality and deliverance from oppressive systems.

Certain men in authority, then and now, did not want people to know how close the two were, and how much he entrusted his teachings to her, so much so that they changed the story. At the time they lived, women were not allowed to study the sacred texts, so the reality that he taught her directly was not something they wanted to focus on. Rather they wanted to hide it with a bigger story of sexual shame. They wanted so much for her to be seen in a negative light that they cast a woman teacher, leader and apostle as the worst thing they could imagine in their world, a prostitute! If you can believe that?!

They even commissioned hundreds of years of art to back up the story – because seeing is often believing. The art itself, was shared throughout the world and the minds of millions carried a false belief. Many do to this day even though the ‘lie’ was rejected hundreds of years ago. That was a lie used against that woman and against all women. To disempower female authority and use sexual shame as the tool.

This is a part of the story of Mary Magdalene and Yeshua, known as Jesus. Regardless of your spiritual tradition, all women are harmed by her story, and the enforcement of a fallen female back to a woman named Eve. Today, July 22 is Mary Magdalene’s Feast Day.

Regarding the drawing here, there is nothing wrong with a woman praying and in her own reflection of her life. Yet how different would it be if she was portrayed, as speaking, with arms raised in teaching or prayer? Many works of art are now being revealed that show just that, women in positions of power.

They fail to see they are also disempowering the relationship between genders in a persistently damaging way, and hurting men as well. I thought you might like to know this. Sometimes, too often, a woman is portrayed as other than how she was and is. Let’s pay attention to this in our lives, and in our culture. The images of the feminine are portrayed largely by the media and systems which do not support life as a whole, and certainly women in power is often diminished.

This pattern is reflected through religion, politics, family, culture, fashion, education and sadly, art. BIOPOWER that shows the female as not how she truly is, is used BY ALMOST EVERY SYSTEM IN THE WORLD. Art and story is used to enforce female subjugation, as a tool of power telling a very different story. We know otherwise and shall speak otherwise, and create images that reflect the empowered feminine.

This is a big reason why I make art. And why I invite thousands of women to make art. We are changing the face of the feminine in our lifetime. Because of Intentional Creativity there are TENS OF THOUSANDS of images of the feminine out in the world. In our homes, offices, sanctuaries, churches, boardrooms, bedrooms, hospitals, prisons, galleries, books and throughout social media. This is part of my sacred assignment.

Take a look at the two images, now granted there are MANY that show her in a positive and powerful light, and especially more recently and in the Orthodox tradition. Yet when I think of showing a part naked woman, being framed as a prostitute, who was the one to whom the teacher Yeshua chose to appear and deliver His message …it is pretty enraging. Regardless of what tradition you follow or don’t, this popular story is impacting the culture and mythology of men, women, sexuality and spirituality. Imagine if you were a woman studying with a teacher….along with a lot of other women, actually. But years after you passed, because you carried so many of the teachings of that teacher but they did not want to give you credit for it, they chose to show you, half naked as a way to shame you. While there is nothing wrong with a female body being part naked, think of it in the context of a church. As a reminder, a very strange message for men and women worshipping in that temple. Further, she would have been a lot darker skin, yet another story for another day. Showing everyone as light skinned who had browner skin. Sigh. How far do we need to go to wake up? 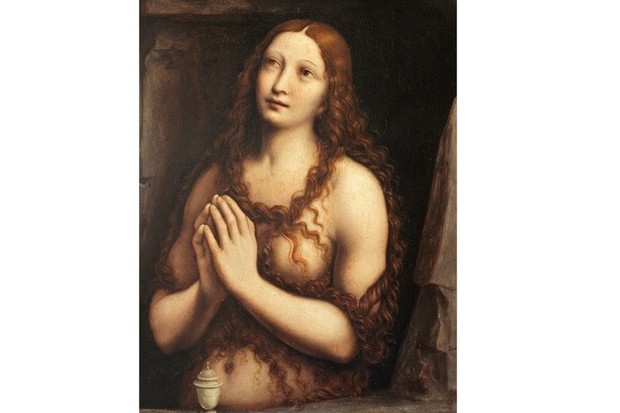 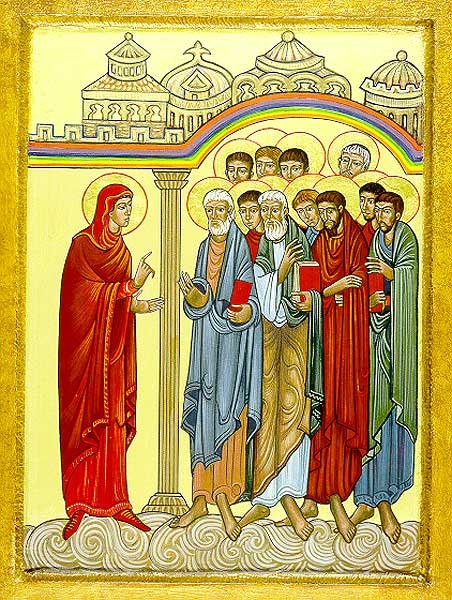 This is to say nothing against female sex workers or sexuality, this is speaking directly about a false story about one historical female, promoted in the Latin West that spread to most of the world. For the record, the Orthodox Church never portrayed Mary Magdalene as anything other than a Saint and Apostle to the Apostles. Many Orthodox, interestingly enough, never even heard the story and are surprised at the hearing of it.

~Biopower (or biopouvoir in French) is a term coined by French scholar, philosopher, historian, and social theorist Michel Foucault. It relates to the practice of modern nation states and their regulation of their subjects through “an explosion of numerous and diverse techniques for achieving the subjugations of bodies and the control of populations.”Wikipedia

“Finally, in 1969, which, if we do the math, is 1,378 years after Gregory’s fusion of Mary Magdalene and the unnamed sinner as proof of her prostitution, the church officially corrected his mistake, or, to be clear, his misogyny. (And this admission came 450 years after religious scholars had rejected it as fiction, as just flat-out historically inaccurate.) However, the image and interpretation of Mary Magdalene as the penitent prostitute continues to be preached; it has remained in place behind the pulpit and deep-set in the popular imagination.” Quoted from Meggan Watterson in her book, Mary Magdalene Revealed.

Here are two images of women in Christian art, praying. Once again, there is NOTHING wrong with the praying feminine image, I find myself in that position a lot, including ending videos with that – feeling of reverence and beauty. And. The image of the downcast praying feminine is much more often seen and promoted as an ideal for women in the church, then the one where she has her hands up and out and is praying with her whole body and being. 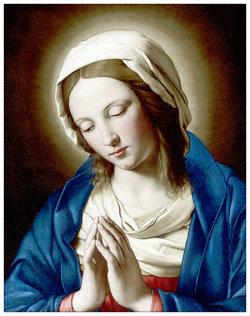 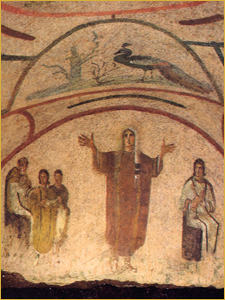 The one on the left is Mother Mary by Sassoforrato, and the one on the right is from Priscilla’s Catacombs in Rome. We will never know perhaps all of the contexts and meanings, but art tells a story worth exploring. In the one on the right we see the woman in marriage, with her child and in the middle, in a kind of prayer, with eyes open. Some say this is an indication of her in the afterlife and hope for her family. Regardless of the intent of the early painter, showing a woman in this kind of standing presence, is still, rare. If our girls and boys could see more images of empowered women, we would have a different gender relationship perhaps. The ‘casting’ of the female into a role secondary to the masculine has been calculated, plotted, enforced in art and history and is completely, fiction. A fiction whose time has come to an end. And for many awake men and women, has ended.

As a young woman on a spiritual path, the missing feminine greatly impacted my life choices. Everything I have done since then is a response to my awareness of this fiction. No longer a reaction to it, I would not want to spend my life force reacting. Rather, an invitation and a celebration of woman, her place on earth, her voice, her sensuality and her essential role in the furthering of the species, as mother. My work is an antidote, and a celebration of life itself as lived between all genders.

It is interesting how often, when I speak about the feminine, I am chastised by women about including the men. Speaking about the feminine does not immediately lead to the exclusion of the masculine…another fiction. Telling new stories that include the feminine as central is integral to my work as an artist, activist, writer, and a human being who desires for equality and justice.

Blessings on your path! I hope I haven’t stirred up too much, and that this provides a little food for thought on the Feast of the Magdalene. If we can be in inquiry together, we can find our way to wholeness on a path with many fragmented stories. I have a needle and red thread to contribute to the stitching together of a story we can work with.

Signed with a red thread from Mary’s spindle… 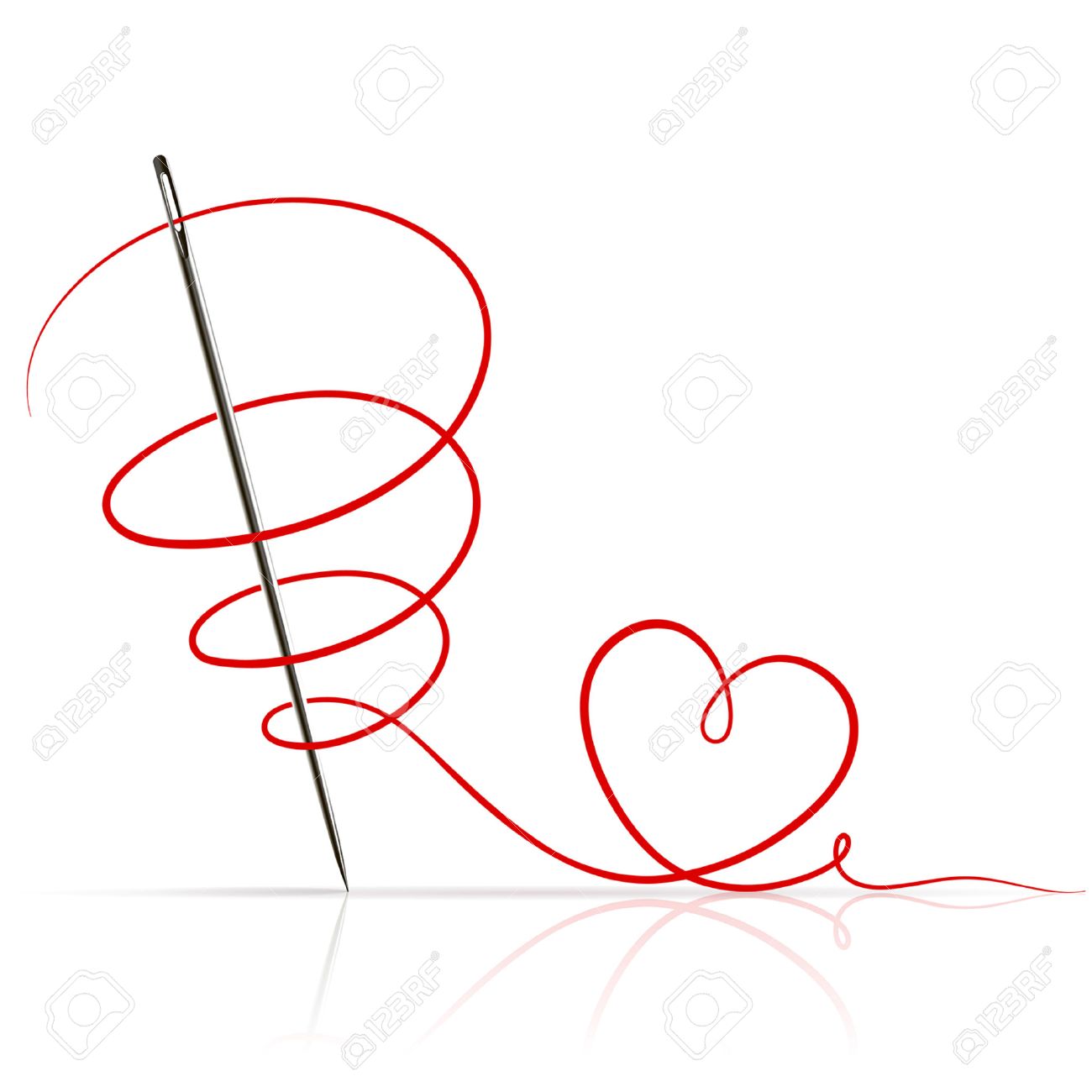 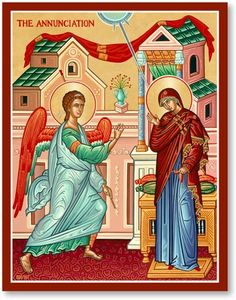 Here Mother Mary has the red thread in her hand….

This video was made to share more about Motherboard : Intentional Creativity Coaching and the meaning behind the work, my big WHY. So it has my invitation to join us inside the video – but the information stands on it’s own regardless of your interest or not in joining us for the training.

Do you want to join us for the voyage? Priority Enrollment is completing TODAY and we are very delighted to welcome women from around the world who have chosen to take their offering to the next level of consciousness.

If you don’t curate your consciousness, who will?

Check it out here. 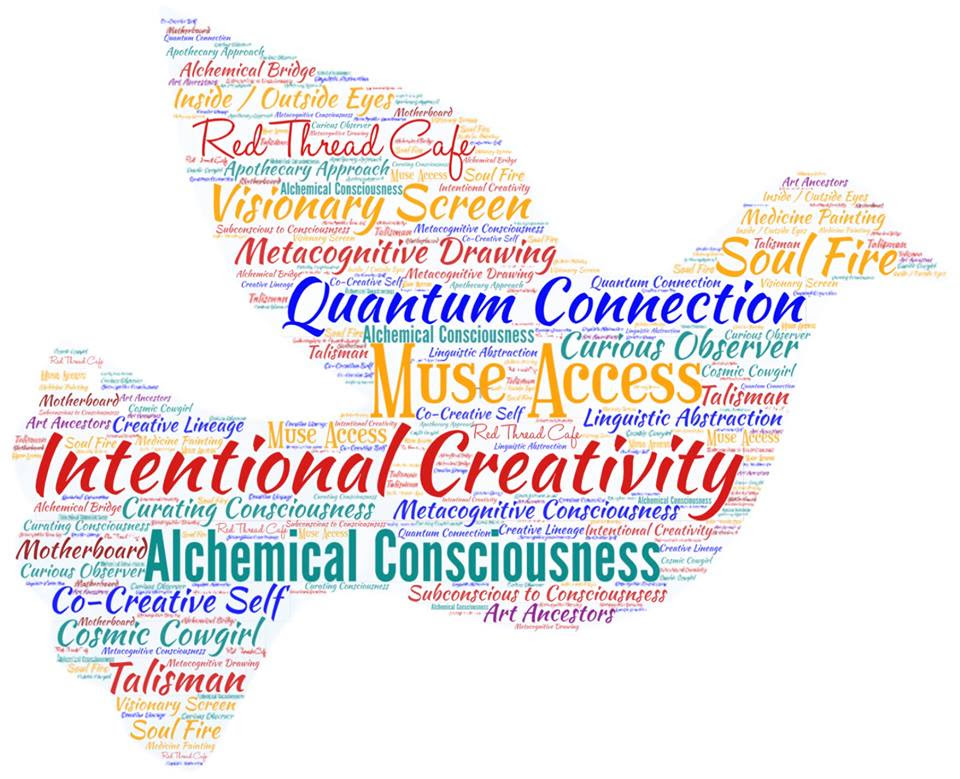 We have some exciting gatherings in person coming up in August including Muse Infused in New Jersey and Diva X in Sonoma. In the Fall we have a Red Thread Gathering called Invocation. We have class called Tree Woman and a new Certification program called SoulScape, coming out of Australia featured in the Sonoma Campus. 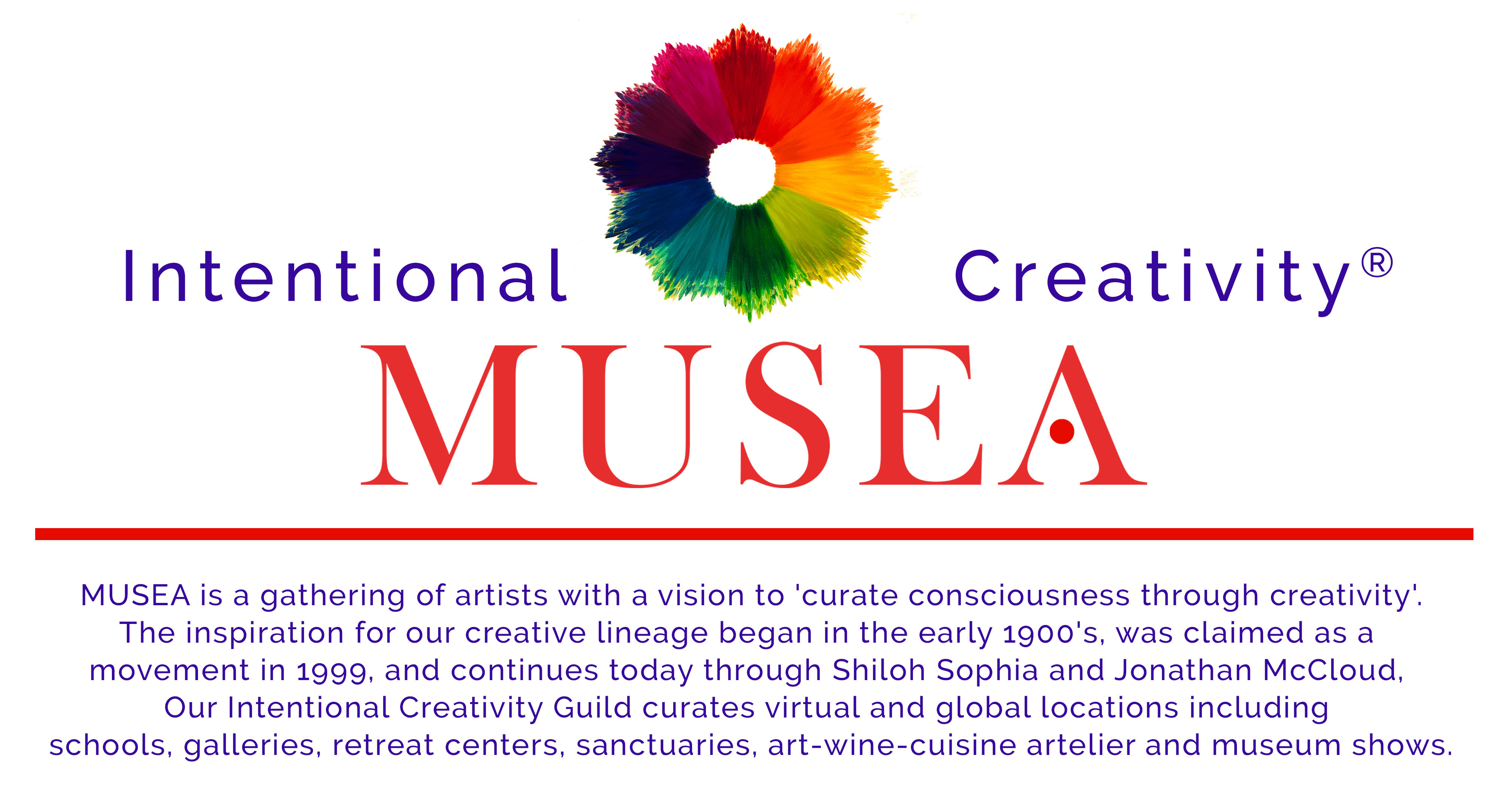