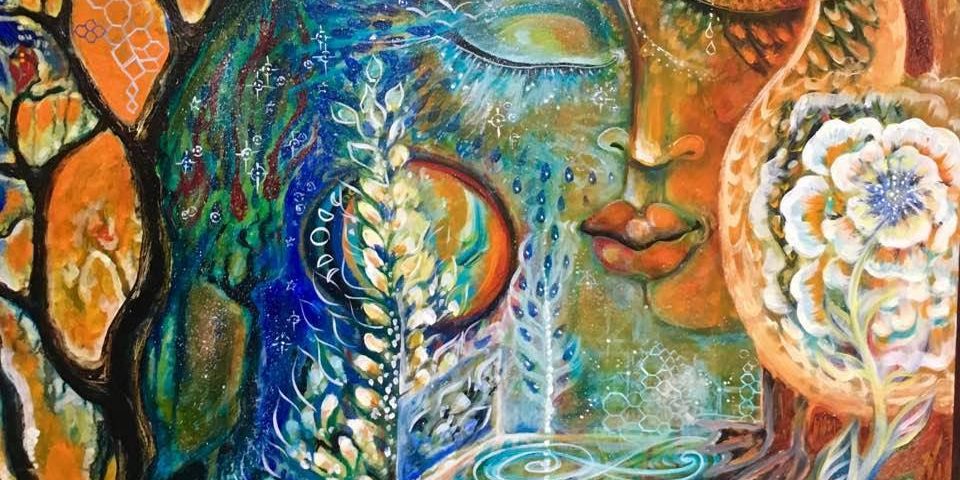 When myth wakes you up from your slumber, do not hesitate, rise and take up the pen!

NEW BOOK of Poetry by Shiloh Sophia: Shelter of the Sacred

The Gift of Restlessness

May you be lucky enough

To have a poem wake you up

From a dead sleep

Yank you to the pen and page

For the reckoning hours

In answering calls of unrest

That only some are alive enough to discern

Discipline is formed through

Waiting to be read with tender fingers

May you be blessed enough

To have an image long to be drawn

By your untrained hand

As you reach for pen and paper

The quivering begins, the mystery reveals

a bit of thigh from the midnight blue dress

In this invitation you sense a sacred rite

A secret society since forever

Where those who tempt the Muse and

In turn are tempted by the Muse

Meet in unseen realms to

May you be brave enough

Answer the call of the wild self

Who lives at the edge and has her art studio at

‘the bridge between the worlds place’

She calls to your domesticated self

To cross and leave mediocrity behind

May you recognize that your creative soul

Has the raw unbridled goods of medicine

That intuition howls at the moon here

Let your desire stir you from slumber

Rise to the occasion of your unrest my love

We are howling just across the ridge

Do you hear us?

Keepers of the Golden Egg : Painting 2017 from collaborative class with Flora Aube in which my phoenix continued to become a goose, but a golden goose! 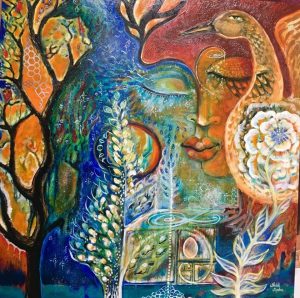 I have just returned home from a two week adventure in Santa Fe with friends and family. A myth about the Animal Queen woke me and so here I am at the writing desk. A few days before I left Santa Fe, I wrote this poem for my students which seems to be along the same thread. Of allowing and perhaps even inviting story to rouse you from your sleeping. That sleeping could be any number of things – comfort – complacency – being a writer who doesn’t write and so on. I wanted to write to the some 300+ women who have spent more than a year with me in the deep dive that is Intentional Creativity. I wanted to thank them for that sacred trust of time and resources.

I knew when I got home I wanted to put on my pajamas, light the fire and candles, make some tea and then later some wine and lay under my furry blanket to see if the kitties would come, and yes, forgive me for my absence. Auntie Mary (Stella Mac) was here so they weren’t alone, but still. Strange though it may be, I spoke to them in the kitty ethers. So I did just that. It took an hour or so but then there they were and we played all day on the couch dreaming and talking. Jonathan too came and went as he does, and we dreamed the future, listened to Dr. Martin Shaw, a mythologist addiction to say the least. Then this morning, the myth came and now I am working on that – but wanted to come in over here along the red thread and send you this poem. Yes written for those who studied with me deeply – yet a call to all those who are on my red thread and in my cosmic tribe, whether I have ever met you or not.

If you plant to take COLOR of WOMAN in 2019 – here is your next action step: In January LEGEND – Oracle and Ally begins – an all new course that has never happened before and will never happen again in this way. I think the myth I am writing now is a part of that story since each woman will be painting her own animal ally in the painting with her Legendary Self. LEGEND is the pre-requisite for Color or Woman – and so if someone has a desire or inkling to join us in 2019 for the Intentional Creativity Teacher Training – then this is the next move.

Sending love from beneath the fur blanket from Sonoma, 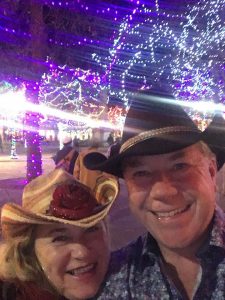 A night out on the town in Santa Fe with my love, Jonathan McCloud 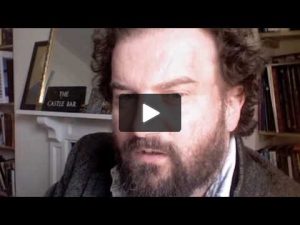 Video of Martin Shaw on Community

“To be in touch with wilderness is to have stepped past the proud cattle of the field and wandered far from the twinkles of the Inn’s fire. To have sensed something sublime in the life/death/life movement of the seasons, to know that contained in you is the knowledge to pull the sword from the stone and to live well in fierce woods in deep winter.

Wilderness is a form of sophistication, because it carries within it true knowledge of our place in the world. It doesn’t exclude civilization but prowls through it, knowing when to attend to the needs of the committee and when to drink from a moonlit lake. It will wear a suit and tie when it has to, but refuses to trim its talons or whiskers. Its sensing nature is not afraid of emotion: the old stories are full of grief forests and triumphant returns, banquets and bridges of thorns. Myth tells us that the full gamut of feeling is to be experienced.

Wilderness is the capacity to go into joy, sorrow, and anger fully and stay there for as long as needed, regardless of what anyone else thinks. Sometimes, as Lorca says, it means ‘get down on all fours for twenty centuries and eat the grasses of the cemetaries.’ Wilderness carries sobriety as well as exuberance, and has allowed loss to mark its face.” ― Martin Shaw