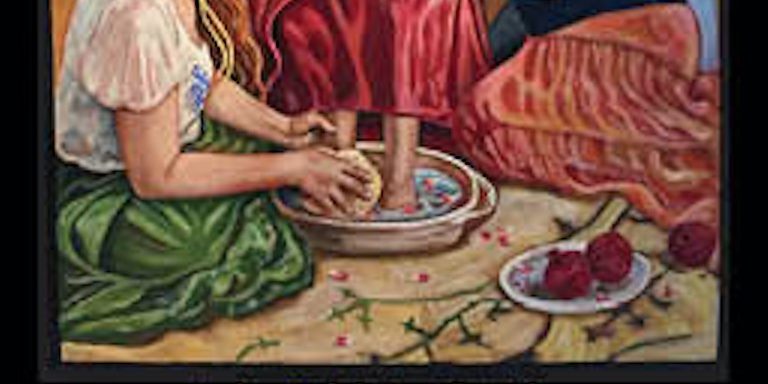 I am delighted to be participating in this event with my dear friend and colleague, Dr. Kayleen Asbo at the Petaluma Musuem. I have a few paintings featured as well as sculptures from Sue Hoya Sellars. We also have other Intentional Creativity Teachers and Students featured including Elizabeth Gibbons.

Learn more and join us for the opening Gala here.

Women and the Search for Wisdom

A month-long event of art, poetry, music and lecture salons

at the Petaluma Museum and Library

Will be followed by a wine and cheese reception

You are invited to join us for an extraordinary experience in the domain of women’s search for Wisdom at the Petaluma Historical Library and Museum during Women’s History Month. From Eve and Mary Magdalene, to Hildegard von Bingen, to Eleanor of Aquitaine, Salome, and Veronica Gentileschi, many examples of women throughout history who have embodied wisdom are brought to life in image, word and sound. Mythic Storyteller and Historian Dr. Kayleen Asbo makes history herself with the curation of a series of art works from local artists on the theme of Women and the Search for Wisdom. Kayleen teaches and lectures around the world and is the keeper of many of the myths impacting women’s lives today.

The art exhibit is co-curated by Nancy Castille and Kayleen Asbo. The exhibit can be viewed from March 4 – March 31 during regular opening hours for the Petaluma Historical Museum.

Accompanying the exhibit will be a series of “Sunday Salons” as well as a Monday evening lecture -performance series from Dr. Asbo entitled “The Art of Women, Sex, and Politics.”

The Sunday Salons Include:

For more information on Catherine Braslavsky and her ensemble, see below. Inanna and The Search for Wisdom Sunday, March 11 at 3 pmKayleen Asbo in conversation with mythologist and artist Nancy Castille -free- ​ Back to the Garden: Eve and Mary Magdalene Sunday, March 25 at 4 pm Lecture, art and music tracing the theme of paradise lost and found – followed by wine and cheese reception and poetry reading ​with Robin O’Brien, folk singer Advance tickets: $25 general admission/$30 preferred balcony seating Tickets are available at: https://www.brownpapertickets.com/event/3333715

Monday Lectures: The Art of Women, Sex and Politics

​March 5 at 7 pm : Divinely Erotic Love Hildegard von Bingen, Julian of Norwich and Teresa of Avila The lives of three extraordinary female saints, all who wrote of God as Lover. Hildegard of Bingen, often described as the Renaissance Woman of the Middle Ages, was artist, composer, playwright, theologian and botanist and was silenced by the church powers for her beliefs. Julian of Norwich, first woman to write in the English language, had a profound influence on TS Eliot. Teresa of Avila, a doctor of the church, twice had to face the Spanish Inquisition with charges of heresy and suspicion of demonic possession. Her famous trial became the impetus for Bernini’sBaroque masterpiece, The Ecstasy of Teresa. With live music of Hildegard von Bingen performed by Robin O’Brien March 12 at 7 pm : Troubadours and Courtly Love ​Eleanor of Aquitaine and Her Granddaughters The rise of courtly love and the musical tradition of the troubadours including one of the greatest love stories of the Middle Ages and the music and art it inspired at Chartres Cathedral. Guest performer: Catherine Braslavsky March 19 at 7 pm: Women of Questionable Virtue: Barbara Strozzi and Veronica Franco Two of the most famous courtesans of Venice were also two of the city’s most exceptional talents: poet Veronica Franco (whose life was immortalized in the film Dangerous Beauty) and Barbara Strozzi, composer of extraordinary works for voice and lute. We’ll also explore the life and works of Artemisia Gentileschi, an extraordinary painter of the late Baroque whose works rival Caravaggio’s. Guest performers: Amy White, voice and Dominic Schaner, theorbo and lute March 26 at 7 pm Harlot, Heroine or Heretic? Salome Most people think they know who Salome was: a lascivious dancer who called for the head of John the Baptist out of frustrated erotic desire. The only woman named Salome in the Bible, however, was one of the faithful disciple of Jesus who witnessed the crucifixion and resurrection. We’ll trace the defamation of this Christian saint over the centuries as her image becomes obscured and replaced by a sexualized image amplified by artists (Gustav Moreau), writers (Oscar Wilde) and composers (Richard Strauss).

About the Catherine Braslavsky Ensemble:

The Petaluma Historical Library and Museum is honored to welcome internationally renowned world musicians The Braslavksy Ensemble to inaugurate our month-long Women’s History Month. Honored by the French government for their role in maintaining cultural heritage , the Braslavsky Ensemble lives in Paris and tours around the world. They have recorded eight albums and been featured performers at world music festivals throughout Europe and Africa, including spectacles of music and spoken word at Le Theatre de Roi , Chartres Cathedral, Notre Dame Cathedral, and the Basilica of Mary Magdalene at Vezelay, bringing the history of women across the centuries to life. Catherine Braslavksy’s haunting voice has been sought out for film and television projects while Joseph Rowe’s prodigious percussion technique has graced the stage with Hamza El Din and the Grateful Dead. Their particular passion is to follow the thread of wisdom in all the world’s traditions, and draw on a rich and diverse tradition of music that spans two thousand years. In this special program created to honor Women and the Search for Wisdom, they will offer a program that includes the 12th century Hildegard von Bingen, Troubadour music of France from the 14th century, ancient Hebrew, Aramaic and Arabic chants and original compositions using first century texts in praise of of the sacred feminine which were recovered in Nag Hammadi, Egypt in 1945. Of their artistry it has been said that they are ” astonishing in both musical breadth and emotional depth, an evening with Braslavsky Ensemble is not so much a concert as a profoundly moving and transformative event that will leave you connected to the vast expanse of history and the best of beauty that humanity can offer”

Join us for an unforgettable gala that includes a musical performance by this utterly unique husband and wife duo, followed by a wine and cheese reception toasting our artists and musicians as we open this month long exhibit in celebration of Women and the Search for Wisdom. May Love Be At the Center of All Choices