A Virtual Art Opening for You! 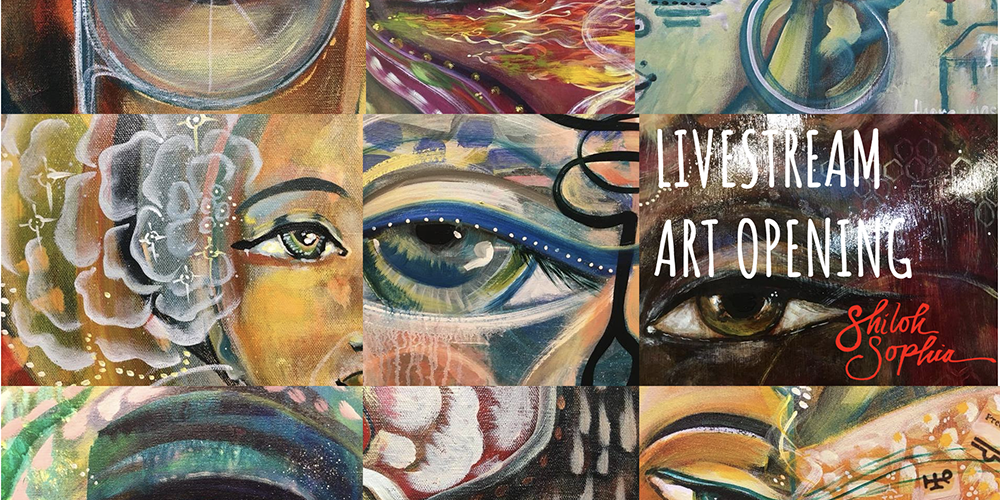 You are invited to join us in person on Friday June 1 for my Art Opening in Sonoma, or by special request you can join us for the Virtual Art Opening behind the scenes look before everyone arrives.

We are here getting ready for the show this weekend. There are helpers everywhere busy with paintbrushes and hammer and nails. I am saying to myself:

Let yourself arrive. This is what success looks like. It doesn’t look like what you thought. It is way better than you could have imagined. Claim this. Share this.

When the economy started changing in 2007 I could feel it and see it before it landed. Times were changing. I had owned my own gallery since the age of 28 (that’s twenty years ago now), so I could sense the threads of our world stretching. Paintings for many years before that flew off the wall and I felt so blessed to be a working artist.

Paintings flew….My Co-Curator Mary MacDonald and I would put a painting up, light a candle, say a prayer and wait and sure enough – here came the person who that painting belonged to. It was magical and good work and connections were made. But there was something else. There was a need. Now I had felt this need for many years…more on that to come…

Girls on film begins….Then in 2008 with our move to Healdsburg from Mendocino we started my video career (insert Girls on Film song as background for reading). I had never imagined being on film. I had made other movies before but nothing like this. Mary suggested we just turn on the camera and see what happens. And so we did. And the rest is history. Our first class, LEGEND was a total success and these many years later we are still running it with hundreds of graduates a year. And LEGEND is a pre-requisite for our Teacher Training, which I launched in 2010 to really bring this work to life in the hands of many. I could only reach so many…but they can reach thousands who really need this work.

Complicated beginnings….Thousands of hours of videos later and we are still at it. Something else was happening much more important than a star being born :) There was a need, a request, for women to connect with their own stories and image. To heal. To grow. To transform. I had what would meet that need, and I knew it. They actually told me themselves! There was a need beyond having a healing image that celebrated women – they had to remake their image for themselves. The re-imagining came right in my front door, sat down, had a cup of tea and wouldn’t leave until I said yes, I will show you. But it was more complicated than that.

You see, I was married for 16 years to an amazing person, but for his own reasons, the full extent to which I will never know – he didn’t appear to want me to share my gifts of Intentional Creativity as a teaching. At first it was protective energy. And further, it was integral to our actual income! What might happen if I showed everyone my magic sauce of how to make a painting, even if you don’t know how to paint. Would our collectors become students? How to bring intentional heart and soul into your creation to alchemize the very particles into medicine. Later, he said he protected me until I was strong enough on my own. I feel that and trust that. And there came a time when I couldn’t contain it anymore for myself. I am so grateful for his careful stewarding and many many years of support. I could not have gotten to the place I was without his support and belief in my work.

The sales slowed way down….it was like a whole new career and need to create income. They did and I did stop showing/selling. My focus was elsewhere mostly. But after creating a million dollars in art sales by the age of 40 it was kind of a big deal to share it in this way. It was scary sharing everything I knew and the way I made a living. I was taught by my mama Caron McCloud and Sue Hoya Sellars and I felt I was holding so many gifts – and they didn’t feel like they belonged to me, but to everyone else. This wasn’t a feeling I made up – it came through me.I felt I was a messenger. In a vision with the Mother Mary, I was actually told I would give it all away. She didn’t mean for free, but give away all the teaching She gave me. At the time, I didn’t now what ‘it’ was. But soon enough I would know it was Intentional Creativity. We have had 229,000 viewers over 5 years for our classes! Thanks to Jonathan’s support we were able to bring the media to the world starting in 2013, 5 years ago. That is why you can join us on Friday: https://portal.shilohsophia.com/art-opening-stream/

I wasn’t proud enough to share them…until now. The reason for this story today is that I haven’t shown this work because they were teaching paintings. They didn’t feel like my own in a way because they were shaped to meet the need of the class or the student. It has my heart and soul in it as an offering – but not my ‘style and content’ in the way I would have done it if I was painting for myself. Over the past ten years there are a rare few I have done without it being in a class. At times my students have heard me whine about it – about not painting for myself. But honestly – this has been SO MUCH MORE INCREDIBLE than just selling paintings to individuals. Now thousands and thousands of incredible healing and gorgeous paintings are released in the world. Homes, offices, hospitals, studios are all holding the beauty of the feminine that never would have existed if I had kept my gifts for myself and a few select clients.

So in a way I wasn’t as proud of the paintings as actual PAINTINGS of my own. But now with about 100 of them here I guess it makes up a body of work worth sharing lol. MY mom, Caron believes they have such a special energy and presence because each one was an offering – some of which were the guide for over 1000 women to paint! I also believe they have magic in them. And I would love for my community to have them instead of store the body of work until I am long gone. Makes a nice story, but you having them makes a much better reality. At this point I tell all the Intentional Creativity Teachers (over 200 of them) that they need to reclaim their paintings for themselves RIGHT after the class! Don’t wait ten years!

The hand numbered 33….We have a special set of 33 that are all 13 step based, which is a teaching we offer in Intentional Creativity and all are hand numbered and coded with a gold circle with a red thread circle around it to connect them. And there are many more from other classes. I have donated them to the Intentional Creativity Foundation which will receive 30-50% of each sale to help fund our first program, Red Thread Connect, which provides 2 free calls monthly for women to connect, and hopefully will finance our Red Thread Connect App. After the show this weekend and our Cosmic Cowgirls 13 year gathering, we will make what remains available at www.shilohsophiagallery.com and let you know so you can come take a look. Many of the paintings were left as they were after the class, and others, I have brought to full completion.

I wonder what my life would have been like if… At times I wonder what would have happened if I hadn’t gone this route of teaching. How my paintings would have evolved and how I would have evolved as a painter and writer. I know that my painting style and skill haven’t evolved like they would have and yes, sometimes that makes me sad. As in most of the classes I am teaching basics that others can work with to find their own image. As at my truest heart, painting and writing are what I love the most. Who knows what the future holds. I am a little painted out at this point ha! When I paint I am in bliss, teaching or otherwise.

If there is a teaching in this Red Thread Letter it is this. Follow the thread of love where it leads you.

I was lead here by loving others, who crossed my path and called me forward. I am here to say this has been better than I could have imagined. I am in a community of thousands who are truly connected through creativity and love.

And so here we are, and while we are here, let’s celebrate! Turns out there was a big need for this work and with my community the Cosmic Cowgirls and Mary and Jenafer Owen – we brought out our gifts to share.

Join us Friday in Sonoma (doors open at 2pm) or watch later – for a preview of my show. If you are local, come on by to 75 Fremont Drive. Cake is at 5. Because a gathering without a cake is just a meeting. Followed by dancing.

with a splash of paint,