Rewire your brain with drawing

“There has to be something we can do to rewire our brain for a more holistic way of thinking. A way to access both/and instead of either/or. A way to hold duality without cancellation of either potential.” I said thinking I was sounding rather smarty.

“There is,” she said. “It takes a little time and a whole lot of mind, but it is possible”

“Show me how…?” I said with a question on my face and in my voice “I want to learn this. I need to learn this because there is a problem”

Dialogue inspired by a conversation between Sue Hoya Sellars and Shiloh Sophia McCloud, Circa 1994

“There has to be something we can do to rewire our brain for a more holistic way of thinking. A way to access both/and instead of either/or. A way to hold duality without cancellation of either potential.” I said thinking I was sounding rather smarty.

“There is,” she said. “It takes a little time and a whole lot of mind, but it is possible”

“Show me how…?” I said with a question on my face and in my voice “I want to learn this. I need to learn this because there is a problem”

“What is the problem?” She inquired, knowing full well what I was going to say, yet going through the process with me. She liked to make me articulate my thoughts.

“I just feel like something went wrong in the evolutionary development of humans around 8,000 or so years ago. We aren’t integrated well with ourselves, one another, or the earth. We see ourselves as separate, which is the farthest thing from the truth.” I said, reaching for an answer that would resonate with her way of thinking and get my point clear for her and for me.

“We are one but many. We are individual yet multiple. If you can hold both at once, there is a chance for integration. Gnosis even.”

She handed me a jar of pens, pencils and stack of paper. “We draw it. We draw what we desire to create. We create the firing of synaptic junctions through somatic action paired with mental rigor”

“Ouch that sounds kind of fancy. Can you tell me more?” I loved her answers, they made me laugh and always want more.

“Well, neurons can communicate with eachother at junctions that are called synapses, it is here an action potential can release neurotransmitters…” She began.

“I mean, tell me more about what to do on the piece of paper.”

“Hold the idea gently in your mind, with your intention, and then begin to move the pen. If today your exploration is holding both/and and moving out of either/or, simply suggest that to your consciousness and draw what you feel arising through you.” “That sounds easy enough – and then the synaptic thingies light up?” I smile into my answer.

“Enough talking… begin making.” She said, obviously complete with my musings. She turns to her own notebook. I turn to mine and began to draw the feeling in my body. To solve a problem within myself. A capacity to see both sides, at the same time. And so it begins.

An infinity sign is what comes first. I imagine my brain making the shape of connection that it needs. I feel the changes in my body. I wish for integration for me and for all beings. I wish for a feeling of oneness that is diverse and colorful. My wish becomes a prayer for peace.

I never cease to be in utter awe, how the single line for myself, lends itself to a wish, which transforms itself into a prayer for all.

Since the time I was little, I have lived with an unshakable feeling that something was wrong. Really wrong. I became an artist to navigate the way I was feeling – to be able to work with the fear just behind my day-to-day created self.

Growing up the way I did, I was aware very early of all of the broken systems. Before I wanted to be an artist I wanted to be a judge so I could set the systems that were oppressive in order. I was so clear – once everyone knows it isn’t working they won’t want to do it anymore. Right? Wrong. Turns out the systems are set up to stay in place with power over structures.

I didn’t want to spend my life fighting systems. I wanted to spend my life loving humans. And I have. One of the things my teacher and mother of my heart taught me was that we have influence through intention and action with our biological structures. I believed then and I believe now that we have a responsibility to become the most whole we can become – whatever that means to each person of course. For me there is a starting place, it isn’t a mystery how to begin.

We begin with becoming accountable to our own journey towards consciousness. We work with mind, energy, and intention in action to become agile with our capacity to influence our own evolution of awareness as a human.

Here at MUSEA we specialize in the pathway of each person becoming accountable to their own journey. We do this through the devoted practice of Intentional Creativity. You can use any medium; gardening, cooking, potting, sculpting, painting, writing, and of course, drawing. Sue used to say it all begins with drawing which begins with seeing.

Let us learn to see in new ways and be at cause for the evolution of our own consciousness and share it with as many people as we can. What you do and how you think shapes the world we are cocreating. 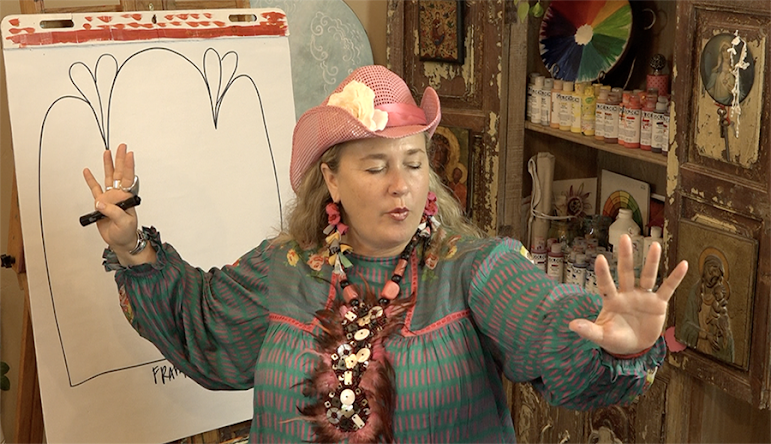 This course has revolutionized my way of thinking about myself. I befriended my inner child and learned how to love myself. Shiloh made me realize creativity is inherent in all of us and shows you how to get in touch with the part of yourself that was either inhibited by teachers or the voice of our critic. She brings her passion, dedication, and FUN to the class. ~ Mary Ann from the United States

To learn more about rewiring your brain with drawing consider joining us for Dance of the Critic and the Muse.